Create an Account - Increase your productivity, customize your experience, and engage in information you care about.

A Brief History of Benson

The Town of Benson, which derives its name from early settler Alfred Monroe Benson, owes much of its historical development to the railroad line that passed through the present location in town in 1886 on its route between Fayetteville and Contentnea.


Mr. Benson's purchase of a 402-acre tract along the Smithfield - Fayetteville Road in 1874 initiated the settlement of the area now known as Benson. During the 1880s Benson sold portions of his original tract to incoming settlers, many of whom were farmers. The Town of Benson was incorporated in 1887 and soon attracted a number of entrepreneurs wishing to take advantage of this new town along an important transportation route. 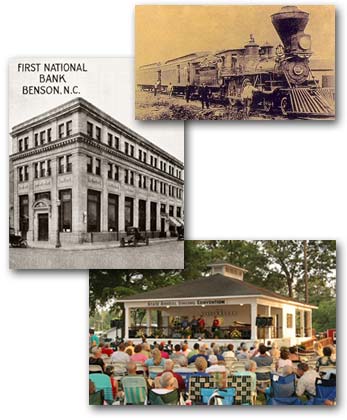 
In 1924, an article appearing in a local paper describing the physical appearance of the town stated:


"Within the past decade (Benson) has made rapid strides in different phases of improvements and now presents to the visitor a neat, clean little town sprinkled about with a goodly number of lovely homes, handsome churches and school buildings, a modern brick hotel, (and) two large banks, the Farmers Commercial occupying one of the most expensive and up to date buildings in the state."


Although the "modern brick hotel" is gone, much of the Benson of 1924 remains today. And, because of that, in 1984, 54 acres of the town, the center of which is the downtown business district, was placed on the National Register of Historic Places. This historic district is comprised of the entire downtown business district and several blocks of surrounding residential neighborhoods.